(written by Julie Desmet from Flows)

“A crazy idea that has become reality,” is how Marcel Jörg, CEO and co-shareholder of Gosselin Mobility UK (Gosselin Group’s moving division), describes the initiative to breathe new life into a decommissioned cargo ship.

Named after the ruler of the Huns, the Attila served for many years as a cargo ship for the transport of construction materials such as gravel. “The ship was too old and no longer satisfied safety standards,” Jörg says. “The owner of the ship wanted to get rid of it because of the high costs of converting it to scrap.”

“A friend with experience in running event boats came up with the idea to transform it into a cruise ship. I was immediately intrigued,” he continues.

It took over a year to raise the necessary funds. “It wasn’t easy to persuade people,” Jörg says. “Cruising isn’t a typical tourist activity in Switzerland, a country where it also rains a lot just like Belgium,” he laughs. 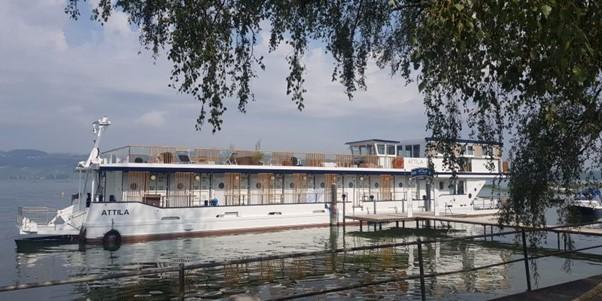 After another year to repurpose the ship and obtain the necessary permits, the Attila rose again as a “boutique boatel”. Gosselin Mobility in Switzerland has over five hundred storage containers, nine of which have been given a permanent home. Each container can accommodate two passengers.

“Working with containers is an inexpensive way to make optimal use of the space. 14 m2 is just enough space for a comfortable bedroom and bathroom,” according to Jörg. “The containers are also even strong enough to support a sun deck.”

The Attila sails past the most beautiful sights in the Swiss Three Lakes Region which consists of Lake Neuchâtel, Lake Murten and Lake Biel. Further info may be found here. Watch the video below for images of the exclusive hotel rooms.

(written by Julie Desmet from Flows)

Gosselin is a division of the Gosselin Group that has its headquarters in Antwerp, Belgium. The company was founded in 1930 and employs a staff of 800 that generates more than 300 million Euros in turnover.

Together with five other companies, Gosselin was one of the winners of the 2022 Diversity Award in recognition of its strong skills development and diversity policies in 2021.

With fifteen years of experience in the moving industry, Dennis Cuhls is the man who will help expand Gosselin in Germany. His task is to expand the German operation to meet the needs of our agent partners as well as corporate and private customers.

April 19 2022: Following the 5th package of EU sanctions vs Russia and Belarus and particularly vs Russian and Belarusian transport companies, we now have some additional information to share.